The Weimaraner AKC Breed Standard – Temperament: Fearless, friendly, protective, obedient and alert. Every word of this standard perfectly describes this handsome boy. I am so honored to had the opportunity to photograph Brody in my studio and celebrate his life with his new Forever-Family, yet another New Hampshire SPCA Adoption Success! Time after time, adoption after adoption, the NHSPCA puts forth an outstanding effort advocating on behalf of all the animals that find a temporary home with them until the perfect Forever-Family can be found. When the Newman family was introduced to Brody it was love at first site. Much gratitude to the staff and volunteers of the NHSPC for making this Forever-Family whole.

‘One person’s give-away is another person’s soulmate.’

More ‘Creatively Classic’ Pet Portraiture can be found at http://www.patcorlinphotography.com/Galleries/Custom-Pet-Portraiture/Creatively-Classic-Pet-Portrai/

This is a very special and rather ‘non-traditional’ image to begin presenting my visual and rather ‘non-traditional’ journey through the compelling streets of Cuba.  As my fellow travelers, family and close friends are aware, the sudden passing of my brother and soulmate occurred about a third of the way through +The Giving Lens’s first workshop to Cuba.  I could not have made it through the journey without the kindness of each and every member of our #TGLCuba team. My gratitude for your support and continued friendship is immense.

As was his way, my brother told me to ‘get on that plane, take lots of pictures’ and (of course) bring me back a Cuban cigar’. Chuck was always pushing me to do what was in my heart, encouraging me to get everything out of this life while the getting was good. I took him at his word and got on the plane, not knowing he was leaving this world in a matter of days. When I heard the news from home I was thrown into an emotional roller coaster. Panic nearly set in as I tried everything but was not able to secure an early departure out of Cuba. Faced with the reality that I simply could not return to where my heart ached to be, I fell into a survival mode of my own, compartmentalizing my emotions as I had no choice but to try and honor him by doing what he wanted most for me.  I honestly believe the my brother had some hand in making me complete the trip. I took a deep breath (many in fact), sat down on the sidewalks of Havana and Trinidad to observe the streets before me and I began photographing.  Before I knew it I was drawn to the four legged animals of the streets and the rooftops. It was here I found the world of ‘The Scrapper’.  Captured on my last day on the island and very nearly the last photograph I took, this one dog, this Scrapper stood out amongst the many. Hungry, covered in dirt, ticks and God knows what else, he moved methodically down the streets, sticking his nose in every bag, finding bits and pieces to nibble on before moving on to another pile. Most people might see this as a terrible life of an exhausting, never ending quest to do whatever it takes to survive.  I, on the other hand, saw a friendly and seemingly happy dog who liked to walk with the humans passing by, a bounce in his step and tail wagging furiously … always. His spirit remained strong though his circumstances seemed dire. The irony did not escape me and it made me smile. Over the years, my brother’s many efforts in his own  struggles to survive led me to describe him to others as a ‘Hell of a Scrapper’.  He fought cancer with dignity and a great spirit. We had more years and memories than predicted because of this.  Cancer finally figured him out and took him from us, but not without one Hell of a fight. Those us us left behind remain her to honor him, his life, his love and his strengths.  Whatever images come from my Cuban Journey are dedicated to my brother’s life … the life of ‘The Scrapper.’

“It Is My Distinct Honor To Present, Her Royal Self, Miss Piper Rose”

“It Is My Distinct Honor To Present, Her Royal Self, Miss Piper Rose”

Today was truly a special treat! I was delighted to share my studio with this eight week old Golden Doodle pup, such a lady and love. The bonus was she brought her humans, too! Congratulations to LacyJane Folger and Patrick Cremmen as their circle grows!

The Goldendoodle is a cross-breed/hybrid dog of a golden retriever with a poodle. One of the newest “Doodles” from Australian and American breeders. Different classifications come from the number of generations bred. They shed very lightly and appeal to people who have  allergies. They are very intelligent and thus very quick to respond to training. They are bred mostly for companionship and enjoy being with people and other pets.

April 2015 NHSPCA Pet-Of-The-Month
Introducing …”Skippy, The Face Of All Felines”

April 2015 NHSPCA Pet Of The Month

Introducing …”Skippy, The Face Of All Felines”

The month of April brought me into the NHSPCA Cat Room for a fun photo session with all of the fabulous felines. I photographed each cat in the room hoping to select one image that might help tell all of their stories. In the end it was Skippy’s amazing green eyes that drew me in and he became the face of all felines looking for their forever families and our April 2015 NHSPCA Pet-Of-The-Month!

In celebration of the launch of the New Furry Friday Program, I am offering “Petography Portfolio Building Mini Sessions” from March 21 thru April 4!

This is an ANIMAL MODEL CALL EVENT! Portfolio Building Images may be used for advertising purposes.

Call to schedule your session today at 603-781-5916 or email Pat@PatCorlinPhotography.com 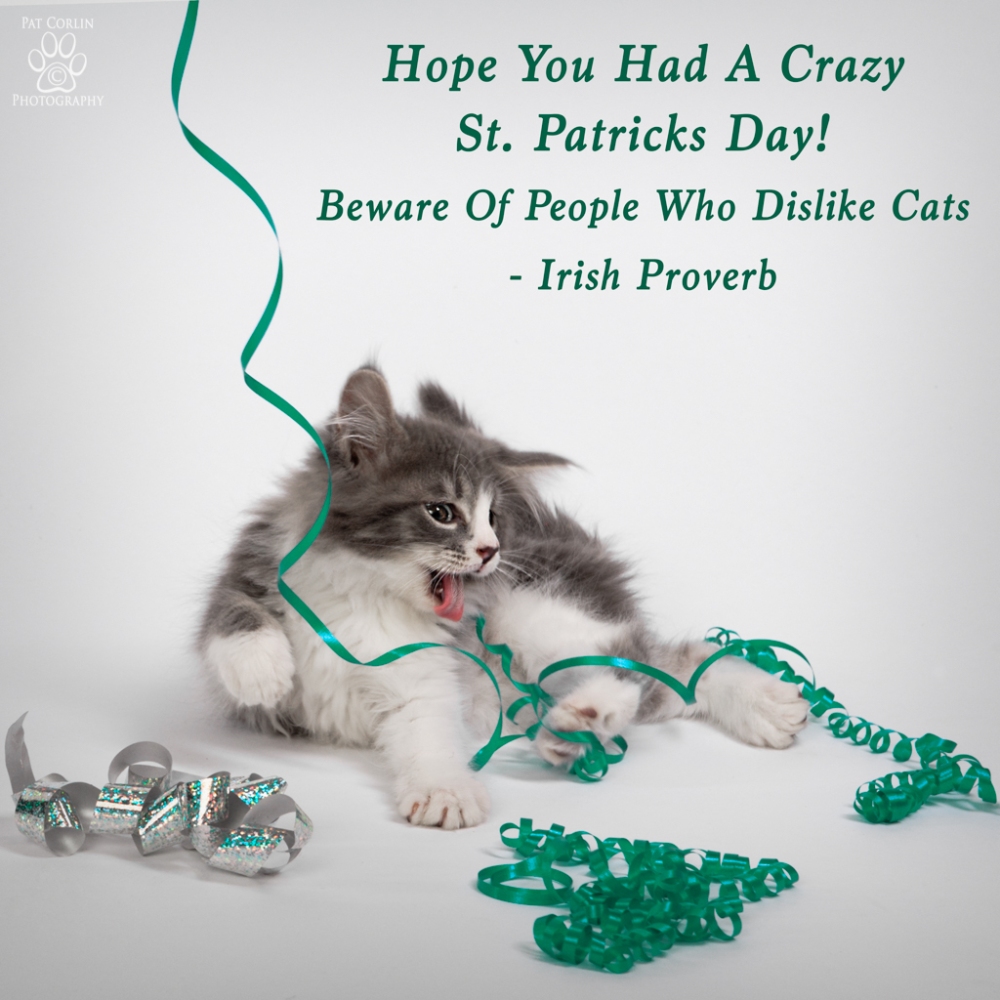 Hope you had a crazy St.Patricks Day!

The North American, Virginia Opossum makes it’s home in the state of New Hampshire but not much further north than that. They do not hibernate and must come out of their dens and search for food all winter long. Their coats are rather thin and their tails, ears and feet are bare so they are very vulnerable to frostbite. This far north they rarely live longer than two years. These mammals are marsupials, meaning they are born very small and continue to develop in the mother’s abdominal pouch. They are nocturnal and are not often seen in daylight, so I felt fortunate to come across this one out for a walk in the early morning light.

Together We Made It Through The Storm

March is National Umbrella Month! Much to our delight, Miss Ruby was not at all nervous around both open and closed umbrellas.  In fact, we suspect she may never have even seen one before our photo session, so all the more delightful to find that she wasn’t bothered in the least!

Re-share this image and you may just have a hand in helping Ruby find her way to her perfect new family!